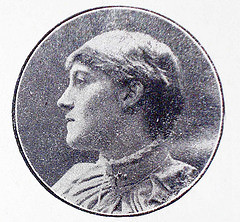 I am in the process of researching a biography of the poet Elizabeth Gibson (later Elizabeth Gibson Cheyne). In the meantime, as there is so little publicly available information about her, I have decided it would be helpful to publish some brief details of her life and writing. I will be adding more  at a later date, including fuller details of all books and a list of her publications in periodicals. I would be glad to hear from, and share information with, anyone who has come across her in the course of their own research. As my research progresses, I shall be making changes and amendments to this information, so please check back to ensure the most up-to-date details.

This work is licensed under a Creative Commons Attribution-NonCommercial 4.0 International License.

Poet and writer Elizabeth Gibson (later known as Elizabeth Gibson Cheyne),  wrote approximately forty books of prose and poetry between 1899 and 1918 (see list below). During her lifetime her poems also appeared in publications ranging from mainstream journals to the little magazines of literary modernism, from the radical press to publications by Theosophists, Freemasons, and Ethical Societies. Though her books had limited circulation, they were noticed in the Times Literary Supplement as well as tiny specialist journals. Her poems were quoted by social reformers, set to music, used in alternatives to traditional religious services, and read out at protest meetings. By the end of the First World War, however, her work was largely forgotten.

Elizabeth Gibson was born in 1869 into a large family in Hexham, Northumberland, where she lived for the first forty years of her life. Her father, John Pattison Gibson, was the town chemist, notable also as a photographer and antiquarian. Elizabeth attended Gateshead High School before working as a day-governess and typist. She was also responsible for helping to educate her younger brother Wilfrid Gibson (1878-1962) who was strongly influenced by her and also became a poet. Her relationship with Wilfrid remained one of the most important in her life.

She had a turbulent personal life, loving both men and women. In 1899, she became engaged to fellow poet William Henry Phelps, but sometime after 1902, the relationship broke down. In 1910, she suffered a period of suicidal depression. In 1911 she married Thomas Kelly Cheyne (1841-1915) a leading Biblical scholar, and moved to Oxford. As well as a shared commitment to social change, she and her husband both challenged religious orthodoxies, searching for truth in all religions, interconnections rather than differences. Thomas, while still an ordained Anglican priest, became a member of the Bahá’í faith soon after their marriage, but Elizabeth, though profoundly religious, continued to reject organised religion.

Elizabeth called herself a suffragist, a socialist, and a freethinker. She supported the militant suffragette organisation the W.S.P.U. (Women’s Social and Political Union) and was a member of the Women Writers Suffrage League.  In 1914, following the outbreak of the First World War, she was one of the signatories of the Open Christmas Letter to the Women of Germany, calling for women internationally to unite for peace. However, some of her later poems indicate that she came to change her views on the war.

After her husband’s death in 1915, she moved to London, where she worked as a volunteer visiting wounded soldiers. She became interested in Spiritualism under the influence of Bishop Basil Wilberforce and founded a group called The Order of the Spirit. She published her last book in 1918. The following year, she enrolled on a Theology course at King’s College London.  After a deterioration in her mental health, she was admitted to Bethlem hospital in 1920, subsequently moving to Camberwell House Asylum where she remained a patient until her death in 1931. She is buried in Oxford, with her husband.

1878
Her brother Wilfrid Gibson is born.

1890s
She begins to publish her poems in magazines.

1899
Her first book, The Evangel of Joy, is published.

1901
The census gives her occupation as day governess and typist

1907-8
She is involved with the W.S.P.U and the Women Writers Suffrage league.

1911
The census gives her occupation as author.
In August she marries Thomas Kelly Cheyne, and moves to Oxford.

1915
Her husband dies and she moves to London, where she works as a volunteer visiting wounded soldiers.

1918
She publishes her last book, The Wilderness Shall Blossom as the Rose.

1919 She enrols to study Theology at King’s College London.

1920
She is admitted to Bethlem hospital.

1921
She moves to Camberwell House Asylum, where she remains until her death.

1899
The Evangel of Joy
1902
A Christmas Garland
The Burden of Love
1903
The Well by the Way
1904
Leaves of Life
A Flock of Dreams
From a Cloister
1905
Shadows
Love’s Fugitives
1906
Flowers from Upland and Valley
A Little Book of Saints
1907
From the Shadow
By Many Streams
1908
A Book of Reverie
A Pilgrim’s Staff
In the Starlight
The Day’s Journey
Sparks from the Anvil
Foam of the Wave
1909
Welling of Waters
1910
Blossoms of Peace
Fruits of the Valley
From the Wilderness
1911
The Way of the Lord (poems)
1912
The Voice of One Crying (prose)
n.d. ?1912/1913
Unto Us a Son is Given (prose poems)
1913
In the Beloved City He Gave Me Rest (poems)
1914
Litanies
I am the Resurrection and the Life
The Son of Man is Come
The Man With the Mirror
The Return Home
Vigils
Oxford
A Rosary
1915
The Lover of Life
Resurrection
London
1918
The Wilderness Shall Blossom as the Rose

Another book, The Book of the Beloved, appears on a 1902 list of her previous publications. However, no copies or other reference to its existence have yet been located. Any information gratefully received!