This section aims to provide a variety of resources relating to nonviolent activism. Developing it in 2014, amidst all the official ‘commemorations’ of the First World War,  I decided to begin with a small selection of my own research materials, and a selection of external links,  relating to war resistance and antimilitarism. More resources will be added in future, possibly including some of my 1970s-80s articles from Peace News.

A commitment to nonviolence is, most importantly, a search for multiple creative ways to resist oppression and bring about social change. As part of this process, nonviolent activists  also try to identify, understand, and communicate about the many forms of violence and the relationships between them. These include (but are not limited to)  the systematic structural violence embedded in different kinds of social organisation, the intimate and often unrecognised violence within our personal relationships, and the internalised violence of  what Emma Goldman called the policemen inside our heads.

The State is a condition, a certain relationship between human beings, a mode of human behaviour; we destroy it by contracting other relationships, by behaving differently.
(Gustav Landauer, quoted in Resisting the Nation State: the pacifist and anarchist tradition, by Geoffrey Ostergaard, 1991)

The master’s tools will never dismantle the master’s house. They may temporarily allow us to beat him at his own game, but they will never enable us to bring about genuine change. (Audre Lorde, 1979)

Wilfrid Gibson war poems: A small selection of poems written between 1914 and 1944.

Elizabeth  Gibson Cheyne on violence and war: A brief selection of anti-war poems plus aphorisms on violence, imperialism and oppression, written between 1904 and 1914.

Kitty   Lamb Interview Notes. 1980/81.Unpublished interview notes with activist Kitty Lamb (1901 – 1992) about her life and the development of her anarchist beliefs, giving insights into some of the shifting social and political groupings, campaigns and alliances of the twentieth century, including war resistance in World War 2.

War and Women: Manifesto of the Women’s Group of the Ethical Movement: 1915. ‘In this dark hour we – a group of women in the ethical movement  … are compelled to speak a word of protest and of hope.’ Speaking out against World War I, women freethinkers call for the inclusion of women in attempts to bring about peace.

Lilian Wolfe – Lifetime Resistance: 1972: ‘I think I was born an anarchist, and events in my life just enabled me to realize that that was what I was.’  Interview with 96-year-old Lilian Wolfe, lifelong anarchist, pacifist and war resister, by Sandy Martin, Stratford Women’s Liberation Group.

Civil Resistance, the website begun by the late and greatly missed Howard Clark,  aims to promote understanding of and research on civil resistance/ nonviolent struggle, and has some excellent resources.

‘Don’t Be A Soldier!’ The radical anti-war movement in north London 1914-1918  by Ken Weller will be republished soon in an updated version. This is the 1985 version.

Pete Grafton’s oral history,  You, You & You! The People out of Step with World War Two is a corrective to many mainstream accounts of that war, and includes  material from interviews with  conscientious objectors and anarchist war resisters.

Open Letter to the Women of Germany and Austria, Christmas 1914, from British feminists calling for their ‘sisters in sorrow’ to unite in the search for  Love, Peace and Brotherhood.

Some of my photographs on Flickr relating to peace and nonviolence. 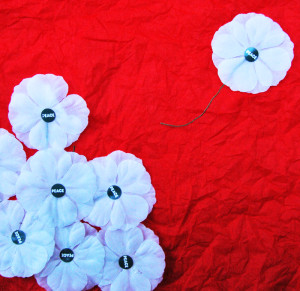 If warfare were not already a respected national institution — if it were not already accepted as the correct ultimate way of resolving disputes — would anybody now think of proposing it? Would someone then solemnly get up and say ‘since we are not getting on very well with solving these problems, we had better just go out and start killing each other’? If they did, how would that proposal be accepted? (Mary Midgeley, letter to the Guardian, 20 June 2014)

War is the health of the State. It automatically sets in motion throughout society those irresistible forces for uniformity, for passionate cooperation with the Government in coercing into obedience the minority groups and individuals which lack the larger herd sense … [T]he nation in wartime attains a uniformity of feeling, a hierarchy of values culminating at the undisputed apex of the State ideal, which could not possibly be produced through any other agency than war. Loyalty — or mystic devotion to the State — becomes the major imagined human value. Other values, such as artistic creation, knowledge, reason, beauty, the enhancement of life, are instantly and almost unanimously sacrificed. (Randolph Bourne, The State, 1918)