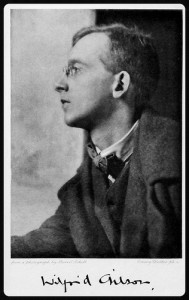 Wilfrid Gibson is perhaps best known for his poetry of the First World War. This small selection of his poems, written between 1914 and 1944,  shows how he continued to develop those early themes. [Four more poems have been added to the original selection in March 2016].

I cannot think of war only in terms of armies or of contending nations: it is to me a business of innumerable personal tragedies: the tendency to think in abstract causes seems to me liable to callous the souls of even the best of men. (1941, Wilfrid Gibson, in a letter to Laurence Binyon)

They ask me where I’ve been,
And what I’ve done and seen.
But what can I reply
Who know it wasn’t I,
But someone just like me,
Who went across the sea
And with my head and hands
Killed men in foreign lands …
Though I must bear the blame
Because he bore my name.

The buzzer sounds, and at our benches, we
Stopping the lathes, two minutes silently
Mourn for the lads who fell; then turn again
To making arms, for killing other men.

In civil life, he drove a patient pen
On smooth white ledger pages, harmlessly:
Now up the rough road of a mountain glen
He drives a fell machine to cancel men.

Ploughing the waste, we turn up from the clay
The bones of warriors in some old affray
Fallen: but, what they fought for in their day,
Or who the victors were, now none can say.

Someone else went in my place. As it happened, that morning a corporal,
Knowing no more than myself I was detailed for draft, had dispatched me
On fatigue with a convoy of lorries to Woolwich to bring back manure for
The gardens of villas whose lawns had been ploughed up for planting potatoes:
And bored to the bone by just loafing about, or by sweeping out billets—
Six men fooling round at a job that a housemaid could do before breakfast—
Or by picking up cigarette-ends and spent matches, or out of the ash pit
Collecting the cinders again (for coal had run short, and the fires of
The lords in the offices still must be kept blazing half up the chimney),
I was glad to be moving at last, to be going somewhere, to be riding
In the icy bright light, as the lumbering lorry crunched over the crisp snow,
Drinking the sun-golden wine of the morning that went to our heads and
Set us all stamping and shouting and singing in rollicking chorus
As we jolted and swung on the lurching lorry across the white country …

So, when the roll came to be called of the oversea draft, there was no one
To answer for Private Gibson, M.T.381907;
And some other man had to pack up his kit in a deuce of a hurry
To fill up the gaps in the ranks and set out to France in my place,
While I rode singing to Woolwich, rode on, knowing nothing about it.

And when at length we reached Woolwich, we leapt from the lorries to tackle
The snow-buried mounds of manure, and thrust in our forks with a flourish
Through the cold and crystalline crust, discovering the rich steaming treasure,
Of gold dung, and easily heaved it, heaping it high in the lorries,
Delighting at last to be doing a man’s job again, to be sweating
At something worth while, at something to feed the old earth and to nourish
Fresh life when so much else was dying, and men thought of little but slaughter…

Then back with the golden-heaped lorries we rode once again to the billets,
Happy and hungry— and I, knowing nothing as yet of my ‘crime’—
‘Absent from draft’— I came back …
But he who had gone in my place,
He who had gone overseas in my stead, who was taking my chances,
Playing my hazards with death, I know not if he ever returned.

Indifferent, flippant, earnest, but all bored,
The doctors sit in the glare of electric light
Watching the endless stream of naked white
Bodies of men for whom their hasty award
Means life or death maybe, or the living death
Of mangled limbs, blind eyes, or a darkened brain;
And the chairman, as his monocle falls again,
Pronounces each doom with indifferent breath.

Then suddenly I shudder as I see
A young man stand before them wearily,
Cadaverous as one already dead;
But still they are untroubled as he stands
With arms outstretched and drooping thorn-crowned head,
The nail-marks glowing in his feet and hands.

Hour after hour, to earn the wage
To keep her and her little son:
All day, hour after hour she stands
Handling cold death with calloused hands.

She does not think, she dare not feel
What happens to shells that she
Handles and checks so carefully,
Of what within each case of steel
Is packed as, hour by hour, she stands
Handling cold death with calloused hands.

What do you see as you pace the night
To and fro
On sentry-go?
The full moon trancing with light
Cheviot silvered with snow!

What do you smell as you pace the night
On sentry-beat
With burning feet?
Redesdale in morning light
Foaming with meadowsweet!

What do you hear as you pace the night
Of breathless fear
With straining ear?
The roar of the frothing white
Lasher of Otterburn weir!