This page includes Helen’s obituary and links to some of her writing and photography, as well as tributes from  friends and colleagues. If you have memories or photographs of Helen to contribute, please send them to me –  judy[at]judygreenway[dot]org[dot]uk – I’d love to hear from you. 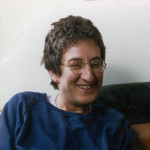 Links to some of Helen’s work

In 2002, following the 9/11  attack on the World Trade Centre  and the subsequent ‘war on terror’, Helen Lowe and Sophie Laws co-edited ‘Piecing it Together’, a special international issue of the radical feminist journal Trouble and Strife, 43, Summer 2002. It includes Helen’s article on religion, gender and politics in Israel: ‘ Israel: the other stories.’  Helen and Sophie’s editorial is available separately here.

No to Fascism, No to Fundamentalism,  edited version of a talk given  to No-one Is Illegal, London, September 2010.

In  2011, Helen participated in a roundtable discussion of grassroots community organisers, reported in Red Pepper September 2011.