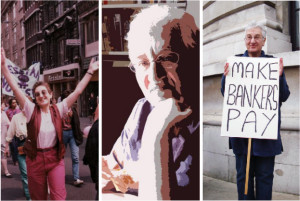 This short piece draws on Helen Lowe’s own words to give a  background to her involvement with the feminist organisation Women Against Fundamentalism. First published in Women Against Fundamentalism: stories of dissent and solidarity , 2014, edited by Sukhwant Dhaliwal and Nira Yuval-Davis, Lawrence and Wishart, pp.302-305.
The editors’ introduction to the chapter, not included here, gives further details of Helen’s participation in the group, as do some of the other contributors.

Download The Spirit of Resistance as a Word Document.

This work is licensed under a Creative Commons Attribution-NonCommercial 4.0 International License.

Months before her death, Helen was leafleting against fascism and religious fundamentalism in the streets of East London, where her grandparents, Jewish immigrants from Russia and Estonia, had once lived. Passionately committed to feminism, anti-racism, secularism and social justice, she was always more interested in campaigning than theorising; in talking to people rather than writing articles. Women Against Fundamentalism (WAF) was only one of many organisations that benefited over the years from her hard work behind the scenes. As she said of activist poet Allen Ginsberg, she was never one for a quiet life.

Helen discovered Ginsberg and the Beat Generation when she was sixteen. They represented a life scarcely imaginable to the young woman growing up in in grim post-war Glasgow. ‘I fell in love with freedom’, she wrote, ‘Freedom to live the life of my choosing’.[2] That same year she scandalised her parents, themselves Communist Party members and peace campaigners, when she was arrested at a sit-down protest at Scotland’s nuclear base. All her life she favoured direct action and resisted authoritarianism.

At twenty, she moved to London, had her daughter Debi, and began a lifelong involvement in housing campaigns. Her experiences then, of how some Leftist groups colluded with white working class racism and anti-semitism, influenced her more recent ideas about creating an effective movement against racism and fascism while confronting misogyny and homophobia:

‘What seems to be beyond [the Left] is the capacity to understand the dynamics of the intersections of race, ethnicity, class, gender and sexuality.’

‘it’s one thing to criticise [them] for not addressing issues of inclusion … another thing to build an inclusive movement in which everyone feels welcome and able to play a role’.[3]

In the 1970s and 1980s she threw her energies into the Women’s and Lesbian Liberation Movements. She was committed to anti-racism, and though for a time she worked only with women, her community activism continued to connect her with a range of diverse groups. As she noted:

‘our oppressions are multifaceted, so our responses are too. And if we’re going to get on with understanding both the responses and the oppressions then we have to … open up the discussion’. [4]

Years before joining WAF, she spoke of its appeal as ‘a force uniting women from different cultures to get on and give ourselves some spirit of resistance’.[5] In 2001, she was inspired by a meeting called by WAF and others to discuss feminist responses to 9/11 and the ‘War on Terror’. She and Sophie Laws subsequently co-edited a special issue of radical feminist journal Trouble and Strife which brought together women’s voices from round the world, including Helen’s own discussion of religion, gender and politics in Israel.[6]

In the following decade, Helen became increasingly concerned by the political promotion of ‘faith agendas’ and ‘family values’ in the UK. And she feared the resurgence of European fascism. She joined WAF in 2007, hoping it would once again become a campaigning organization which could re-energise older generations of activists, enthuse younger ones, share ideas and take action. She was only too aware of the dangers of exhaustion and burnout; of how hard it is to sustain democratic structures, learn from past mistakes without discouragement or cynicism and maintain ‘the dignity of fighting even when it feels like the battle can’t be won’.[7]

In a discussion towards the end of her life, she concluded that to build ‘a secular and inclusive movement, one that affirms the role of women and gay people, people of all religions and no religion, and people of all ages and abilities’, we need to ‘abandon traditional forms of left versus right and embrace alternative strategies [such as non-violent direct action] developed by … brave people in their struggles for equality and human rights.’[8] She called for a politics enacted with creativity and courage, and her own creativity, courage and commitment helped to nourish those she worked with. As she once wrote, in a note to herself:

Giving in with no resistance is not what I grew up to be about, and I want to be part of the resistance now. After all it was not just hatred of injustice that started me off, but also inspiration from those who resisted.[9]

[1] All quotations are Helen’s own words, taken from unpublished material in my possession.

[3] Notes for talk given as a WAF speaker at a meeting against Racism and Fascism organized by No-one is Illegal, London, September 22, 2010.  An edited version of the talk here.

[6] Trouble and Strife 43, Summer 2002. The complete issue, including Helen’s article and the joint editorial she wrote with Sophie Laws, can be downloaded from here.

[8] Notes for talk given as a WAF speaker at a meeting against Racism and Fascism organized by No-one is Illegal, London, September 22, 2010. An edited version of the talk here.