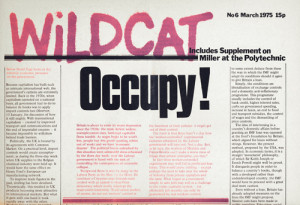 This, and other articles from the 1970s on this website, first appeared in often obscure and ephemeral publications that are now hard to find. They were written as polemical interventions in the debates of the time, and I might choose to say things differently now. But they represent a perspective often missing from accounts of that period, and contribute to the historical record of attempts to make links between anarchism, feminism, and sexual liberation. Such attempts, shaped by their historical context, are part of a process of activism and debate which predates the seventies, and continues today.

This article was published in Wildcat No.6, March 1975, p.6, under the heading ‘Not freaks after all’. Wildcat was a monthly anarchist / libertarian paper published in London.

Libertarians tend to take it for granted that sexual liberation is a Good Thing. The rhetoric of free love is commonplace among us, as is the idea that what we believe should affect how we live as well as what we say. It can be disillusioning to find anarchists making nasty jokes about homosexuals, ‘nymphomaniacs’ and ‘ugly’ women and to discover how many get married, feel jealous, make love with the lights out and are generally not that much different from anyone else. Worse still, a number of the men seem to believe that the sexual revolution means fucking any woman they fancy — and, if she doesn’t like the idea, there must be something wrong with her politics or her libido. Probably both.

So anarchists are subject to the same conditioning as anyone else. If we can recognise that and understand what it has done to us, we can begin to bridge the gap between principles and practice. (We may find we need to rethink some of the principles as well).

All too often we talk about inhibitions, repressions, conditioning, as though these were some sort of plaster cast over our natural instinctive selves; break the plaster and we’ll be free. We talk of sexuality as though it existed in isolation from emotions and ideology and we talk of our desires and emotional needs as though they were the real, true expressions of ourselves which society has suppressed.

The Women’s Liberation Movement has made it possible for many of us for the first time to share and begin to analyse experiences and feelings usually kept private. The slogan that freedom means the possibility of making our desires into reality has been challenged, because we have begun to question the nature of those desires.

This questioning is a major feature in the pamphlet ‘The Politics of Sexuality in Capitalism: Part 1’.[*] The writers discuss how those feelings which we take as ‘given’, as spontaneous responses to people and situations, are in fact created in us by family structure and our particular experiences in it, by the dissociation in our society between work and home, public and private, emotion and intellect. It is not just that our desires are repressed and manipulated by society; the desires themselves, with all their contradictions, are formed by our specific conditioning. The pamphlet is written from a marxist point of view and contains a number of presuppositions with which anarchists are likely to disagree. But it raises issues which are crucial to any attempt to make fundamental changes in the way we live.

It is easier to theorise and to talk about what we would like to be than to talk about what we are. For many of us, our sexual practice remains an unexamined area of oppression. It is threatening to admit to ourselves that we are dissatisfied, that we are inhibited, that we have reactionary desires and emotions, that maybe we don’t even want to be as free as we are told we should be. It can be almost impossible to admit it to others. We somehow imagine that things are different for them, that we are the only failures. And we feel guilt and inadequacy as a result of this isolation and privatisation.

After the publication of the pamphlet last year, women in London held a series of one-day conferences to try and link our personal experiences to some sort of theoretical understanding. This January, Brighton Women’s Liberation organised a weekend conference on female sexuality. Over 300 women met in small workshops and we tried to break through the generalisations and the rationalisations and the intellectualisations to the reality of our own lives.

We talked, among other things, about jealousy, monogamy, fantasy; about lesbianism, bisexuality, celibacy; about power and aggression; about fear and guilt and shame. We were mostly able to be honest and found we were not freaks after all. The need to label ourselves according to our sexual practice began to seem less relevant than it usually does. No great theories emerged; it’s too soon for those and it wasn’t what we were there for. We had fun together, eating, drinking, dancing, singing, laughing, as well as talking.

I came away having learned more about myself and about other people. There will be more conferences, more discussions, more writing. It won’t be easy to change things; many of us are not even certain what changes we want. But we’re beginning to find out.